This brings legitimacy to the project against the much-touted “LUNA is backed by nothing, UST is risky” 80 IQ memes.

It is my opinion that Terra could further diversify its LFG reserves by buying GOLD.

GOLD is $1950 per troy ounce at the moment. A tonne of gold is therefore 62 million USD.

LFG could easily dedicate 300 million USD over the next 12 months to purchase 5 tonnes of Gold. They could continue purchasing BTC as the main backstop, as well as other Layer1 tokens proportional to the amount of UST held in each of them.

But how much is 5 tonnes of gold?

5 tonnes of Gold would put the hypothetical Terra nation as nation #80 in terms of Gold Reserves, ahead of countries like Colombia, Hong Kong, Chile or Uruguay. And all this doable over a year…

That would make Terra nation #50, further surpassing countries like Ireland, Morocco, Nigeria, Malaysia. Think about the prestige this would give to UST when a random citizen of the world is paying for their coffee with UST in 2030.

Or the increased credibility vis-a-vis institutions that find it difficult to go down the crypto rabbit hole.

In this interesting thread, Tascha argues PoS chains are the new nation-states.

@TaschaLabs
If L1 chains are the new nation states w/ their own sovereign economic ecosystem, proof of stake is the foundational engine that enables healthy circulation of energy & values throughout the system. https://t.co/29MZhtny33

Layer 1 chains are the new nation states. Difference is you can be dual, triple, quadruple citizens without having to give up your old passport.

I argue that, as such, Terra should start stacking gold. After all, a combo UST + Gold is a perfect combination. The newest form of money (programmable and in the blockchain) and the oldest form of money (time-tested over millenia) hand in hand. You love to see it.

There is one asset that has long been considered universal “money”: Gold. Gold protects purchasing power and provides protection against inflation. Gold can also be employed as a financial asset for hedging, risk mitigation and financial insurance. Throughout human civilization, gold has been the ultimate money and the pre-eminent store of value. In times of crisis, gold is the asset turned to by both investors and central banks.

An efficient and workable form of money must fulfil a number of universal characteristics. It must be durable, easily divisible, portable, available in limited supply, homogeneous, and difficult to counterfeit. It must also perform the three key functions of money, i.e. be a medium of exchange, a store of value, and act as a unit of account for economic transactions and valuations. Without exception, gold fulfils all of these money characteristics and performs all of these monetary functions.

Physical gold is a finite tangible asset which is divisible, fungible, relatively scarce, difficult to mine, indestructible, and cannot be synthesised or debased. It has a high value-to-weight ratio and it is easily portable and easy to store. Gold has no counterparty risk or default risk since it is not issued by a central bank, government or bank. It is therefore the ultimate safe haven asset. Perhaps most importantly, gold retains its purchasing power over time, which is why it has been consistently trusted and accepted as money for so long. In essence, gold embodies the ultimate reputation as ultimate money.

Gold has been used as money for 97% of the time during the last 2500 years. It is an an incredibly powerful endorsement that gold again and again is chosen as the pre-eminent form of money on a free market.

Gold coins circulated as money within numerous societies for over 2500 years from the 6th century BC right up to the 20th century and in doing so, gold facilitated trade and boosted economic activity. It is only during the last 70-80 years that gold has not circulated universally as money. This latest 3% of time is a relative blip compared to the previous 2500 years, making the very recent past look like an outlier of anomaly. 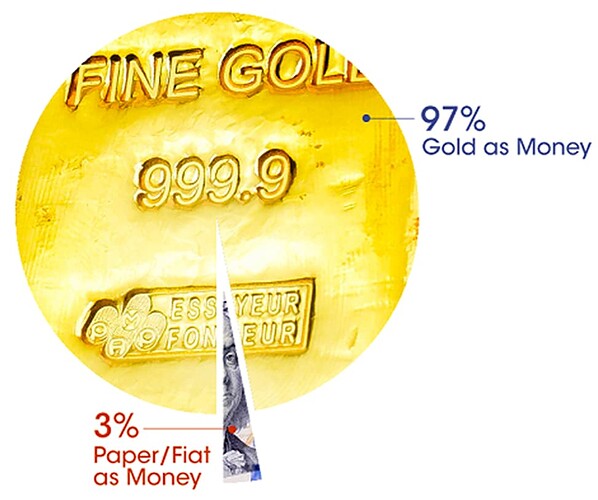 Throughout the last 2500 years, gold has been chosen as money because it best fulfils the characteristics of money. Gold has throughout human history naturally been adopted as money by different civilisations. From the first gold coinage in the Lydian civilisation during the 6th century BC, all the way through ancient Greece, the Roman Empire, and the Spanish and British Empires, the longevity of each and every one of these societies was underpinned by gold.

Likewise, for much of the 19th and 20th century, gold acted as the foundation stone for the entire international monetary system, from the classic gold standard through to the Bretton system where gold performed the role of a stabilising lynchpin for the world’s national currencies. Given the unprecedented and unchartered challenges now facing the international monetary system, there are increasing calls and expectations for gold to once again re-enter the global monetary sphere as a stabilising influence. 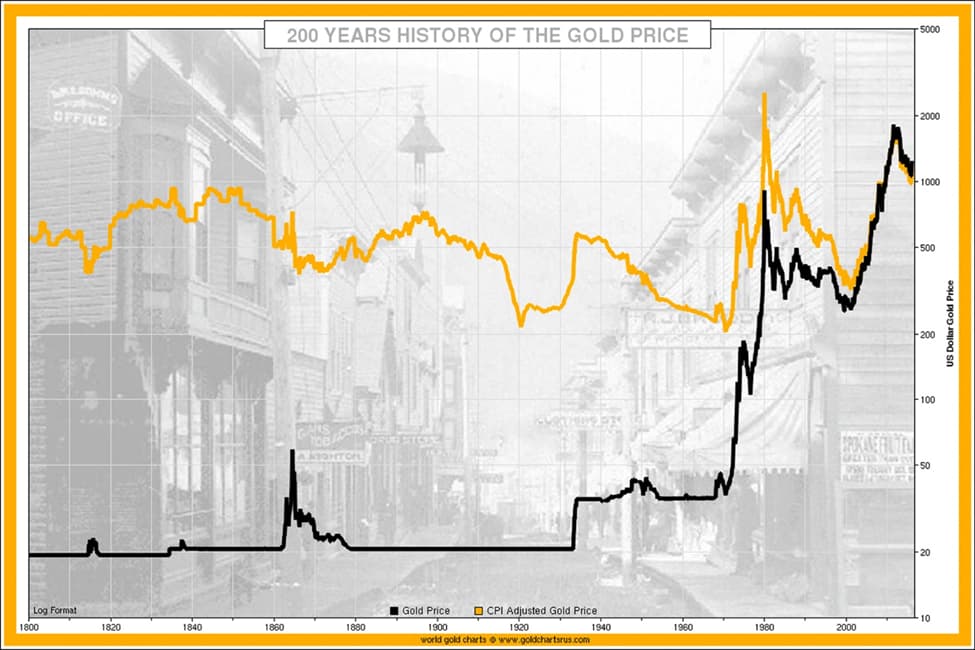 Gold as a Store of Value

Gold retains its purchasing power over long periods of time despite general increases in the prices of goods and services. In other words, an ounce of gold today can be used to buy a similar amount of goods as it could historically. This is why gold is the ultimate store of value and a long-term inflation hedge. In contrast, paper/fiat currencies continuously lose purchasing power until they become completely worthless. Gold is a superior form of money vis-a-vis fiat/paper currencies.

In fact, gold’s purchasing power is constant over very long periods of time, a phenomenon which has become known as “The Golden Constant”.

Because the gold price adjusts to changes in the general price level, and thereby allows physical gold to retain its value, the gold price is closely monitored by financial markets and central banks as a signal of future inflation, sometimes called inflation expectations. This is why the gold price is often referred to as an inflation barometer.

Gold as a Safe Haven

Gold is a proven and accepted safe-haven and wealth preserver because holding gold works as a safety net during currency crises and during bouts of inflation. In times of financial market or economic stress, the gold price almost always increases, simply because people move some of their wealth into gold. This shift into gold is based on historical experience, wherein during periods of market turmoil, the counterparty and default risk of most other assets spikes, while gold retains its universal perception of having no counterparty risk and no default risk.

Therefore, gold assumes the role of financial insurance against monetary crises, geopolitical risks, and systemic financial system risks. On a practical level, during extreme economic events such as hyperinflation and currency crises, there is often a flight to small denomination physical gold bars and gold coins because these bars and coins have a high value-to-weight ratio and are portable, and retain their value during periods when fiat currencies collapse in value to zero.

The gold market is also highly liquid. This liquidity aspect of gold also comes to the fore during financial crises when the counterparty and default risks associated with other financial assets becomes more acute. Physical gold can also act as a hedge against the inherent depreciation in fiat currencies. This is because physical gold is in finite supply and cannot be debased whereas fiat currencies regularly do become debased through inflation and via expansionary monetary policies. This currency hedging properties of gold can be illustrated by looking at the sustained long-term incremental depreciation of the US Dollar in terms of gold from April 1968, a time when the US dollar price of gold was just $35 per ounce, to the present.

Do as Central Banks do, Not as they Say

Central banks hold gold for similar reasons as private individuals do. Due to its unique properties of high liquidity, lack of counterparty risk, and safe haven status, central banks hold gold as an asset of last resort and as a ‘war chest’ that can be activated in times of monetary crises. Central banks tend to downplay these roles of gold since gold competes against national fiat paper currencies. However, the actual actions of central banks in holding vast amounts of gold bars demonstrate that they continue to view gold as a strategic reserve asset and as the ultimate money.

The Bank of England, one of the world’s expert authorities on gold and custodian of gold on behalf of over 70 central banks, summed up the central bank rationale for holding gold when it stated:

There are three principal reasons why countries wish to retain an element of gold in their reserves:

(a) as the ultimate store of value, the “war chest” argument

The Bank of England went on to say:

“For thousands of years, gold has been, in times of war and crisis, the ultimate store of value and medium of exchange. Gold is virtually indestructible, anonymous, mobile and almost universally acceptable. In times of crisis and uncertainty, the presence of a sizeable gold holding boosts confidence of creditors, not least because gold is the highest quality asset: unlike foreign currencies, it is not a claim on a debtor (bank or government) and therefore does not have the same risk of default”.

Beyond these roles, central banks also activate their gold holdings during non-volatile monetary times, by lending, leasing and swapping part of their gold holdings to commercial bullion banks in the gold market and thereby generating a return via interest. This also puts paid to the false notion that gold does not pay interest. It does.

The US, Germany, France, and Italy holds the world’s largest official monetary gold reserves, as reported by the World Gold Council. These are strategic gold holdings which have been kept in place since the 1970s as an option on gold re-emerging at the heart of the international financial system. Emerging market countries which did not have the benefit of large historic gold holdings, such as China, or countries which previously dwindled their gold stockpiles, such as Russia, are now rushing to catch up with the G7 nations. China and Russia are accumulating gold reserves in preparation for a possible monetary reset and a shift away from the unipolar world of US Dollar hegemony.

In this guide, you will learn why you should buy gold. The guide contains info about gold as money, gold as investment and the gold price.