Given the need for more distributed public infrastructure nodes, we propose a community based lcd endpoint which can front a pool of endpoints hosted by the community. The idea here is to use a proxied load-balancer from cloudflare to front much of the ddos load, and internally proxy it to a known set of community endpoints.

We have created a cloudflare load-balancer endpoint at https://lcd.lunatics.dev, which currently proxies to just one of our public lcd node. This is just a poc to demonstrate the concept and isn’t production ready yet. The access is currently rate-limited

How will it work? 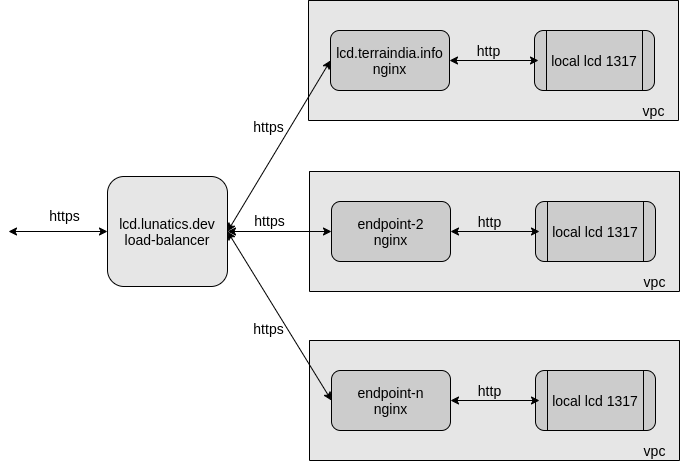 If this method works out for lcd, it can be extended to fcd.
Open for discussion now

Thanks for this proposal, the infrastructure’s decentralization is a major point to focus on to make sure Terra is unstoppable.

However, we see some major downsides to this method:

It appears to us that the best way of decentralizing infrastructure is:

Of course, it is possible to assist the user with curated lists. Even this part could be decentralized further by making them importable from ipfs hash or url to enable anyone to provide one (ie. uniswap token lists), but that’s another topic.

TL;DR: we agree on the idea of having multiple redundant providers, but not on having a centralized single point of failure in front of it, which is the main topic of this proposal. Instead we should let the users individually choose the endpoint of their choice.

Thanks for the feedback.

Apart from a centralised load-balancer, individual endpoints are always open for connection. Like our endpoint https://lcd.terraindia.io is independently accessible without the load-balancer(lcd.lunatics.dev)

These days, its pretty common to host rest services through a load-balancer. Digging nameservers of lcd.terra.dev, it appears to be behind a cloudflare load-balancer