Proposal to Reduce the Terra Tax Rate to Zero

UST is in a massive expansion phase. This means we have inflated swap fees to stakers. When UST market cap becomes stable we can expect that Tax Rate to no longer is a negligible % of the staking rewards.

however, if I make a smart contract right now, having it set “temporarily” to $0 instead of making it permanent means I still have to build to account for that anyway.

Agree with both points from you and @tansawit, and as you’re aware, removing the tax mechanism completely will likely have to come with the next major software upgrade.

Also agree with this.

Having a tax which is separate from the gas fee is also smart. Gas fees are a function of network congestion. Taxes are a function of economic optimization to provide for the public good of the Terra ecosystem (ensuring the peg of UST and the value of Luna)

I also agree with this. From a payments perspective and managing velocity of money later on down the line this could be critically important.

Generally, I’m in favour of this. At least as an experiment since it can be fairly easily reversed.

A few comments/considerations other than those above:

I mentioned to @dokwon that the Stability Fee (the tax in question) was a blocker for us at Bidali because it is a deterrent for non-speculative payments uses. Because of how the stability fee of 0.01%-1% is calculated, it can very quickly get to be too expensive for mainstream adoption. Particularly if peer-to-peer money is to compete with the status quo of Visa, MC, PayPal, local debit rails and cash.

This is most apparent in financially underserved markets that are most likely to adopt crypto payment rails in their economy. In many countries with a low income per capita, even a $0.05 USD fee is prohibitive to usage when $5-$20/mo is the average income.

So I’m pretty stoked to see this!

However, if the cost to the developer is the primary factor, similar to what it would be for “real world” users in financially underserved markets, rather than push the Stability Fee to 0, maybe we simply tweak the parameters such that the cap on the stability fee is lower than 1% or is a fixed amount instead of a percentage?

This enables us to do proper monetary policy experimentation rather than taking it to the extreme end and removing one of the knobs entirely.

Admittedly this does not tackle the “additional developer complexity” issue but, if I can speak for ourselves at Bidali, this was non-issue. Our biggest gripe has primarily been the aggregate transaction cost from all the fees (and chain data size - a topic for another day

2. Do we lose some cost predictability & fee compartmentalization?

Another consideration is that while solely relying on gas fees to prevent network spam is likely sufficient, one of the issues plaguing many other networks is the fact that fee markets are dynamic and not very predictable. There is an obvious trade-off here between user/developer experience and preventing network congestion.

As such, I wanted to float the idea out there that maybe a better long term solution would be to consolidate the gas fee and stability fee such that there is more predictability to the transaction fees. Potentially even based on the type of transaction (ie. swap, smart contract deploy, stablecoin transfer, etc).

Having different “fees” based on usage is one of the important things that I think currently makes Terra uniquely viable to be a monetary network and I’d hate to see it go.

Expanding on this idea requires more thought, but the lack of predictability in Ethereum and other chains has caused a lot of trouble. This is one of the things that I actually like about the Stability Fee - it’s predictable.

I definitely wouldn’t eliminate the functionality entirely. Currently, the state of most blockchain networks is that they are used for speculation. We are still early on adoption within non-speculative real-world payments use cases. So naturally, most people are going to be doing swaps vs. payments right now because stablecoins just aren’t used for payments that much, yet!

This is something we’re focused on at Bidali - enabling anyone to easily use them to pay for real goods and services.

If the goal is for Terra to get to be “too big to fail”, then while the Web3 ecosystem is a great place to start, ultimately (IMHO) people need to be able to UST and other stablecoins to pay for “real world” goods and services easily and with low (or zero), predictable fees.

This flywheel effect requires adequate stablecoin liquidity (which we now have), the tooling to make it easy to send and receive in P2P, Consumer-Merchant, B2B and Government payments capacities (we already support this at Bidali), and low transaction fees.

This change could be the final piece required to cross the chasm from speculation to mainstream payments activity!

However, in the long run, if/when lots of real payments transactions are happening on Terra then even a small % of all aggregate transaction volume could eclipse the swap fees. FX markets are huge, but global payments is by far the biggest market of them all and is unbounded.

Overall, in favour! Just brain dumping some thoughts I’ve been holding in for a while that I’d love to get feedback on and this seemed like the right place, right time.

Apologies for the long post, this is what happens after a couple glasses of

Should this move forward for a vote?

The 0.35% tax rate is a reason that prevents effective market arbitrage, and makes it costly to restore peg. 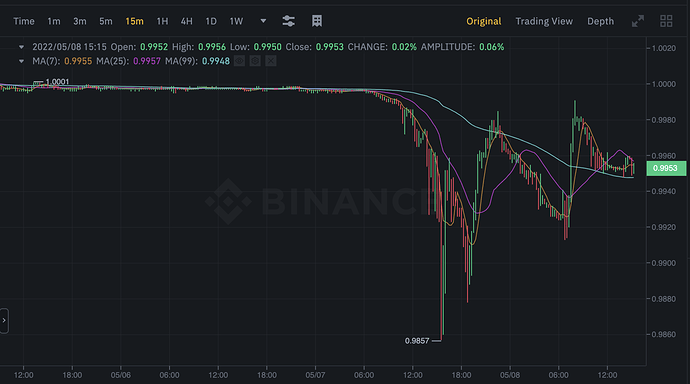 If community desire is not to eliminate the tax completely, at least vote to reduce it significantly.

The effective trading cost for most active exchange are all lower than 0.1%, depend on the trading volume of the trader. E.g. Binance has 0.075% trading fee for regular user, which can be reduced to 0.015%.

The Terra Tobin Tax of 0.35% is huge compared to exchange with efficient fees.

The Terra Tobin Tax will need to be on par or below other trading fees, to promote effective arbitrage (not significantly higher)

Otherwise, the community could continue to see peg loss. These peg loss will be hard to recover, due to the Tobin Tax

What do you guys think about this idea? Please share your opinion

[Proposal] BURN and REMEDY tax with each LUNA transaction

Based on our volume which is around 3B $ (last 24h) at the moment if we implemented only 3% burn tax on each buy and sell transaction we could burn around 300,000,000,000 LUNA at the time of writing this proposal (I took price of 0.0003). This burn tax could be a measure put in place until the supply is low enough for us. What More

You could even implement temporary 1% of the volume going to the people that lost money during the crash. Wouldn’t that be wonder…